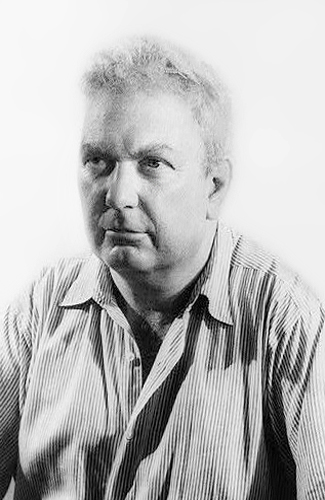 Alexander Calder (July 22nd 1898, Lawnton, Pennsylvania – November 11th 1976, New York) was an American sculptor. He studied mechanical engineering before attending courses at the Art Student League in New York (1923-1925). He lived in Paris and visited frequently the Academy of the Grande Chaumière. In 1926, Calder made small animals and other articulated wire characters to animate them by staging a miniature circus show, “Calder’s circus”.

His first personal exhibition was organized in 1928 in New York. In 1931, “Sandy” Calder exhibited with the Abstraction-Creation group. The artist creates abstract objects moved by the air or by motors that make them spin endlessly, hanging black or colored metal sheets that move “poetically” on fragile threads. Marcel Duchamp baptizes them with the name of “mobiles”. Calder imagines steel sculptures anchored in the ground, black or red sculptures to which Jean Arp gives the name of “stables” (stable). These abstract forms evoke an animal and plant world. Over time mobile and stable acquire more imposing dimensions. Calder uses primary colors and employs engineering techniques for its realizations. The artist invents multitudes of variants to his assemblies and receives numerous public requests from Unesco (Paris), Olympic Stadium (Mexico), etc.

In 1952 Calder receives the great sculpture prize of the Venice Biennale. In 1974 Calder embarked on the series of “Crags”, hanging “mobiles” at the angles of the “Stábiles”, and the “Critters”, black “Stábiles” that resemble shades of human forms.
In parallel, Calder does an important work on paper, engravings, lithographs, most often very colored.

The inventive and poetic character of his sculpted work, his genius to combine abstraction and evocation of nature, make Calder one of the greatest sculptors of the twentieth century.