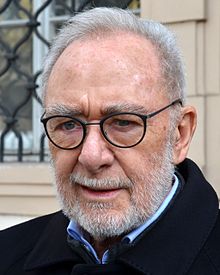 Richter is considered the first living German artist and ranked as #5 at the Artprice index in 2021.

Gerhard Richter (German: [ˈʁɪçtɐ]; born 9 February 1932) is a German visual artist. Richter has produced abstract as well as photorealistic paintings, and also photographs, and glass pieces. He is widely regarded as one of the most important contemporary German artists and several of his works have set record prices at auction.

Richter was born in Hospital Dresden-Neustadt in Dresden, Saxony, and grew up in Reichenau, Lower Silesia (now Bogatynia, Poland), and in Waltersdorf (Zittauer Gebirge), in the Upper Lusatian countryside, where his father worked as a village teacher. Gerhard’s mother, Hildegard Schönfelder, gave birth to him at the age of 25. Hildegard’s father, Ernst Alfred Schönfelder, at one time was considered a gifted pianist. Ernst moved the family to Dresden after taking up the family enterprise of brewing and eventually went bankrupt. Once in Dresden, Hildegard trained as a bookseller, and in doing so realized a passion for literature and music. Gerhard’s father, Horst Richter, was a mathematics and physics student at the Technische Hochschule in Dresden. The two were married in 1931.

After struggling to maintain a position in the new National Socialist education system, Horst found a position in Reichenau. Gerhard’s younger sister, Gisela, was born there in 1936. Horst and Hildegard were able to remain primarily apolitical due to Reichenau’s location in the countryside. Horst, being a teacher, was eventually forced to join the National Socialist Party. He never became an avid supporter of Nazism and was not required to attend party rallies. In 1942, Gerhard was conscripted into the Deutsches Jungvolk, but by the end of the war, he was still too young to be an official member of the Hitler Youth. In 1943, Hildegard moved the family to Waltersdorf, and was later forced to sell her piano.  Two brothers of Hildegard died as soldiers in the war and a sister, who was schizophrenic, was starved to death in the Nazi euthanasia program.

Richter left school after 10th grade and apprenticed as an advertising and stage-set painter, before studying at the Dresden Academy of Fine Arts. In 1948, he finished vocational high school in Zittau, and, between 1949 and 1951, successively worked as an apprentice with a sign painter and as a painter. In 1950, his application for study at the Dresden Academy of Fine Arts was rejected as “too bourgeois”. He finally began his studies at the Academy in 1951. His teachers there were Karl von Appen, Heinz Lohmar and Will Grohmann.