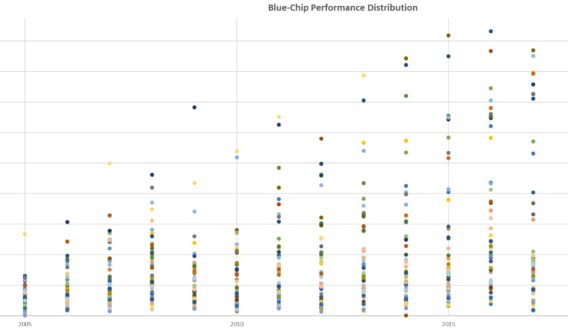 Blue-Chip artist performance distribution from 2000 to the end of 2021 shows a clear increasing trend for most of the artists. On average, the performance achieved 4.37 times their 2000’s year value with the average highest rate at 7.8 and the lowest rate at 1.27.

The Scottish painter has been achieved the top performer among the blue-chip artists of the world. His highest paintings index rate was achieved in 2017 at 5,284 having an average of 1,803 and closing the 2021 year at a 4,134 value index compared with his initial value of 100 in 2000.

Born in 1959, Doig is one of the most renowned living figurative painters, he has settled in Trinidad since 2002. Many of Doig’s paintings are landscapes, somewhat abstract, with a number harking back to the snowy scenes of his childhood in Canada.
He draws inspiration for his figurative work from photographs, newspaper clippings, movie scenes, record album covers, and the work of earlier artists like Edvard Munch.

Following Doig, the second achiever was the Chinese-French painter San Yu (1895-1966) with his highest index score at 4,188.

In the third position, the Japanese artist Yayoi Kusama at 3,392 thus becoming the most valued female artist in the global market.

In the fourth position, the Swiss sculptor Alberto Giacometti (1901-1966) achieved a value of 2,619 and closing the top 5 performers list with the American artist Christopher Wool (born in 1955) who achieved the highest rate at 2,328.

Source: ArtsGain analysts based on calculations of the standard and well-known databases of global artists and their price indices.