BASQUIAT, THE GREAT ARTIST BEHIND THE MYTH 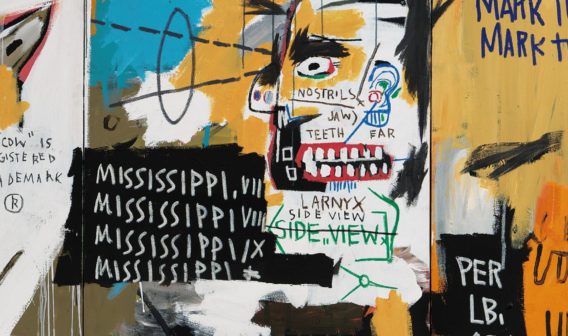 He barely worked for a decade, but time was enough to leave his mark on the eternity of art history. His powerful works screamed in rage against racism, social hypocrisy, and capitalism. On August 12, 1988, at just 27 years old, he was found dead in his Great Jones Street loft. The autopsy certified his death from “acute mixed drug poisoning.” The artist died, the myth was born: Jean-Michel Basquiat, one of today’s most sought-after artists.

“His voice is still heard from him,” the Basquiat sisters told ABC a few years ago. He spoke very loudly, but he did it with his works ». And so much. To this day, either due to the dynamics of the market or the validity of its art, Basquiat is one of the most sought-after artists in the world. For sample, the latest Christie’s auction “Multisabores” painting was sold for 13.48 million euros, an impressive price if we add that in 1990 it was acquired for “only” 95,000 euros.

So we said that it became a myth. And in a current one. But it is that in life, he achieved great success. He touched an invisible key that elevated him to the Olympus of art on the fast track. Genius thing. And we are talking about a gifted child who wanted to dedicate himself to comics and who managed to completely sell his first individual exhibition when he was 21 years old. We are talking about a young man who managed to work with many great dealers of his time, such as Shafrazi, Bischofberguer, or Gagosian. We are talking, finally, of a born talent, of an immeasurable artist who came to create a music band (Gray), who acted as a DJ, who rubbed shoulders with David Bowie or Madonna (he was his partner for six months), and who starred in an indie movie with Edo Bertoglio. Even the “New York Times” had a cover for it. Artist and icon. Creator and famous.

The great artist behind the myth
Three years ago, an exhibition at the Guggenheim Museum in Bilbao – “Now is the time” – set out to vindicate his figure as a “serious artist” since it seemed that myth had devoured his art. They wanted to bring us back to a capital painter who is at the same level as those other classics that he nurtured, from Pollock to Cy Twombly, from Leonardo to Picasso.

In that sample, the main features of Basquiat were pointed out, which allow us to understand part of his success. He was a conceptual artist because of his appropriationist strategies and the accumulation of references (the street, hip hop, History, jazz …). He was also a committed man and an expert withdrawing. And perhaps the most remarkable thing: he was an author in whom language played a primary role. His way of working with images – very close to cutting and pasting – and twisting words – crossing them out, changing letters, inverting them, avoiding them – make reading him almost natural for today’s internet user. In that, he was ahead of his time, and in that, he is rabidly current.

We may never know where Basquiat would have come if he had not died so young – today, he would be only 57 years old. Perhaps the myth of the young (and exquisite?) Corpse catapulted him further to fame. Be that as it may, he is one of the most desired and most iconic artists in recent art. After his untimely death, the artist Fred Brathwaite wrote what could have been the best epitaph of him: “He Lived like a flame. He burned brilliantly. Then the fire went out. But his fire is still burning. And we keep heating up: us and the auctions.