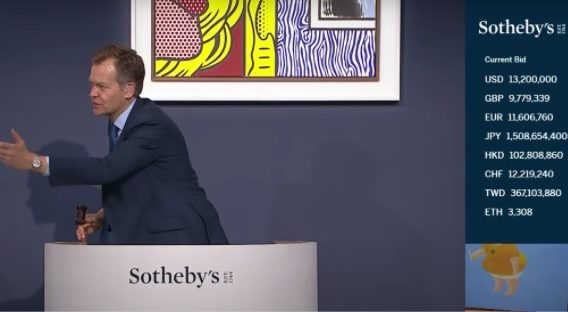 Sotheby’s last week held its most famous autumn evening event in New York which the cryptocurrency Ethereum was the king of the night, apart from the great works of contemporary art auctioned.

For the first time in  Sotheby’s history (and the entire auction industry), ETH was used for real-time bidding alongside standard fiat currencies (e.g. US dollars, €uros) for two Banksy paintings.

Auctioneer Oliver Barker started the bidding at 1,122 ETH (US$ 4.5M). At first, he was uncomfortable and mispronounced the new bid prices several times. When he got used to it, something else happened.

The phone bids were expected to be in US dollars, where the auction staff calculated the amount of ETH traded in real-time, and Barker would be able to quote both currencies simultaneously. But during the bidding process, someone on the phone bidding role directly used ETH. Both the auction staff and Barker took more time to convert ETH into US dollars, especially since the price of the cryptocurrency price fluctuated rapidly during the sale.

In the end, the hammer fell to 1,397 ETH / US$ 5.6 million. The winning bid was from Sotheby’s London contemporary art specialist Emma Baker for her client with palette number 153. The painting sold for $ 6.6 million, with a buyer’s premium.

Banksy’s Love is in the Aire, and the painting was the second most expensive lot in the sale.

The auctioneer started the bidding at 898 ETH / US$ 3.7 million. After more than 30 offers, the hammer fell to 1,696 ETH / US$ 6.8 million, almost US$ 3 million from its low estimate. The winning bid was over the phone received in the New York salesroom. In the end, it was sold for $ 8.07 million with a buyer’s premium. 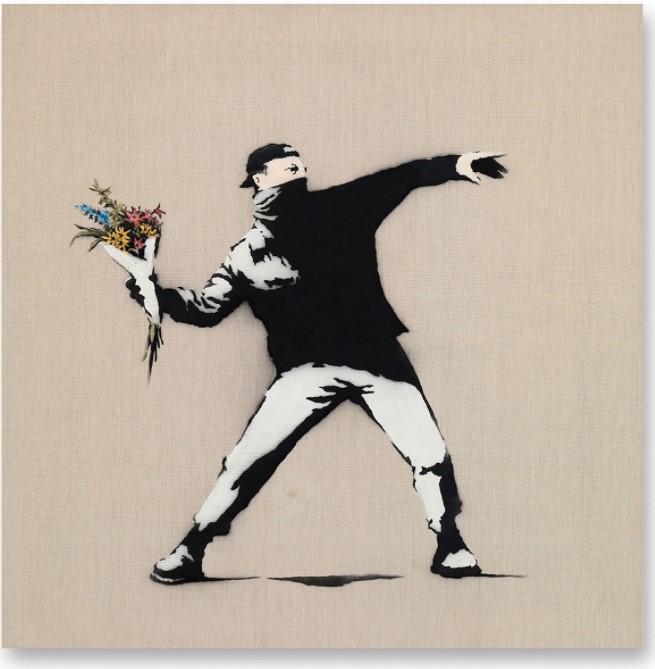 The painting was originally a Banksy street art creation located on the West Bank Wall. The person in the painting disguises himself as a protester and poses with gas bombs, juxtaposed by colorful flowers in his hands that have an anti-war sentiment.

The final price was 1,696 and 1,397 ETH which in total totaled 12.4 million dollars reaching the second and third place of Banksy’s sales records.

All 23 lots offered were sold, and the total sale was the US $ 71.8 million, showing a strong trend in the modern and contemporary art markets.

Article extracted from ‘The Value’ magazine published on the 22nd November 2021.