Should art investors be skeptical of the current ‘taper tantrum’? 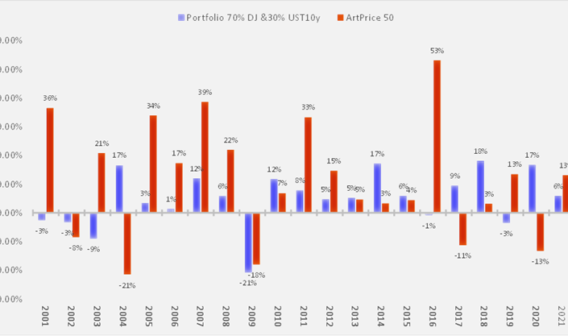 In its August policy update, the Federal Reserve (Fed) announced plans to begin scaling back its pandemic-era stimulus. The announcement of a potential tapering of its $120bn a month asset purchase program raised questions about a possible “taper tantrum.” In 2013, a signal from the Fed regarding its plans to reduce assets led to a sharp sell-off in markets for both bonds and equities. The negative correlation between bonds and risk assets did break down for one month at the start of the “taper tantrum”.

It seems likely to us that in the post- covid years, major western economies will experience “Stagflation”, an environment with modest GDP growth and higher inflation. While such an outcome will be negative for bonds and equity, investors might want to consider diversifying their portfolios to uncorrelated asset classes – such as Fine Art and Art Funds!

Our performance analysis of the top 50 most valuable artists, compared to a traditional 70/30 Balanced Equity/ Bond portfolio, shows that investors in Fine Art are benefitting from a negative correlation over the last 20 years. Further, investors take advantage of lower downside risk, becoming most valuable during another taper tantrum. (Sortino ratio of 1.6x vs 0.98x for fine Art versus a balanced portfolio, respectively).

Why is Stagflation a likely scenario?

While recent inflation data has shown a swift uptrend in the U.S. and Europe, economic activity seems to have peaked from its post covid high. Since the announcement by the Fed in August, various important U.S. economic indicators have been publicized significantly below market expectations:
1) August’s weak payrolls report, which showed just 235,000 jobs created last month compared to 1.1m posted in July and 720,000 expected,
2) consumer confidence fell in August to the lowest level since February to 113.8, down from a revised 125.1 in July, and
3) U.S retail sales where reports have missed expectations for 3 months in a row.

Further, from a structural perspective, longer-term interest rates will remain at low levels like in the past. Government debt has substantially increased over the last decade, and so has debt to GBP across most major western economies. Ultimately making governments more reliant on low-interest rates to keep federal budgets in check. Hence, central banks (particularly the Fed) will be cautious in turning down any monthly asset purchases as this would trigger a rise in long-term interest rates and puts a further fiscal burden on governments. 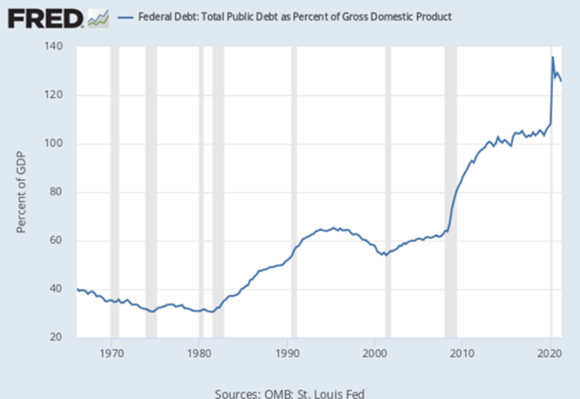 In times of macroeconomic uncertainty and the risk of policy errors by central banks and governments, investors can look for tangible assets, a store of value, and long-term uncorrelated characteristics to traditional asset classes.

Fine Art has particular positive attributes as it is considered a safe haven in times of crisis and uncertainty. As ArtsGain’s Investment Mgr, Bastian Wagner, notes, “A Picasso is a Picasso, it has been in demand for its aesthetic attributes in times of war, political crisis or inflation, no matter some 100 years ago or today in 2021.”