Which country is taking over UK role in the EU arts market? 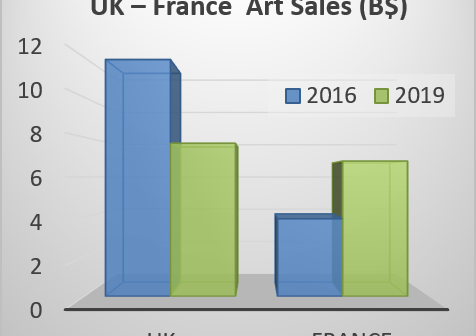 In Europe, a number of regional markets performed better than the global market, albeit from a much lower base. These included France, discussed further below, and other mid-sized markets such as Spain, the Netherlands, and Austria, which all saw increasing sales, restoring their markets after stagnant or declining sales in 2018. Sales in the EU overall reached $20.4 billion, a decline of 4% year-on-year. Excluding the UK, which exited the EU in 2020, sales would have risen 5% year-on-year to $7.6 billion (which is less than 40% of the size it was with the UK).

France was the one major art market to buck the declining trend, with sales advancing 7% in value to $4.2 billion. This rise also led to an increase in global share from 6% to 7%. France was once the center of the art world, being the largest and most important location of sales in the early 1900s. However, by the end of the 1920s, a combination of economic and political events, including the 1929 stock market crash and ensuing Great Depression, and a massive devaluation of the French franc, caused many dealers to go out of business, leading the market to shift towards the US and UK where economic and buyer power rested. During the decades that followed, the US market dominated, with Europe feeding supply and wealthy American collectors supporting demand. This enabled a strong infrastructure of galleries, auction houses, and expertise to consolidate in New York, further strengthening its position. However, during the 1950s, the popularity of its artists and the School of Paris, as well as the dynamism of its galleries, saw Paris gain a temporary revival, with buoyancy of the market largely supported by foreign buying. Within a decade, London and New York regained their premier positions. This was again due to their
established bases of wealth and economic power, but also – importantly – because of the introduction of a new system of taxes on art sales and other regulatory deterrents that drove both buyers and sellers away from France to more liberal trading regimes elsewhere. The French market was burdened with a highly complicated and rigid set of fees and taxes on art sales that added nearly 40% to sales prices, versus 10% to 15% in the UK. Add to that a tax on imports into France as well as the droit de suite royalty on sales
of living artists’ works, neither of which was in place in the UK or US at that time, and the regulatory quagmire led Europeans and Americans to simply bypass Paris and conduct sales in London and New York.

Since the 1960s, although France has remained a key market in Europe, it has never rivaled the size or centrality of the UK or US as a global market hub. As the UK has been the central, low-cost entry point for sales into and out of Europe until now, its exit from the EU has been seen as an opportunity for another market in Europe to act as a gateway for
trade between the EU and the rest of the world, with most hopes pinned on the French market, given its relative size, cultural infrastructure, and historical significance. Several UK- and US-based galleries opened branches in France in 2019, including major top-tier dealers such as David Zwirner. While these shifts may assist the market’s buoyancy in the short term, many of the issues that have prevented the market from rivaling the UK are still in place, including overregulation and tax complexities. France will still be subject to EU directives for VAT and resale royalties, as well as the newly introduced EU Regulation 2019/880, which substantially limits the import of books and manuscripts, ancient art, and
antiques into the EU, and which was put into law in 2019. Although many of these directives have been shown to have negative consequences on the trade in art, countries such as France have not yet taken the opportunities to minimize their effects by competing on an equal footing with the UK. Now out of the EU, the UK also has the opportunity to divest itself of some EU regulations and to the extent that it does so, will still leave France at a competitive disadvantage for extra-EU sales, which make up the bulk of the trade by value.

The future terms of trade between the UK and other EU member states remain unclear, and any deterioration of these could affect art businesses and promote more intra-EU trade to the benefit of France. This will have less of a detrimental effect on the UK, however, as it is estimated that EU sales currently only make up around 20% of the value of imports and exports from the UK, with extra-EU trade dominating values. The most immediate effect after Brexit on the analysis of sales will be the reduction in the size of the EU art market. The share of sales by value in the EU has declined from just under half of the global market in 2008 to a low of 31% in 2018. With the UK still a member of the EU this remained relatively stable in 2019 at 32%, but without the UK, the EU market would have accounted for just 12% of global sales.

You can find out more about which cookies we are using or switch them off in settings.

This website uses cookies so that we can provide you with the best user experience possible. Cookie information is stored in your browser and performs functions such as recognising you when you return to our website and helping our team to understand which sections of the website you find most interesting and useful.

Strictly Necessary Cookie should be enabled at all times so that we can save your preferences for cookie settings.

If you disable this cookie, we will not be able to save your preferences. This means that every time you visit this website you will need to enable or disable cookies again.

This website uses Google Analytics to collect anonymous information such as the number of visitors to the site, and the most popular pages.

Please enable Strictly Necessary Cookies first so that we can save your preferences!

Please enable Strictly Necessary Cookies first so that we can save your preferences!