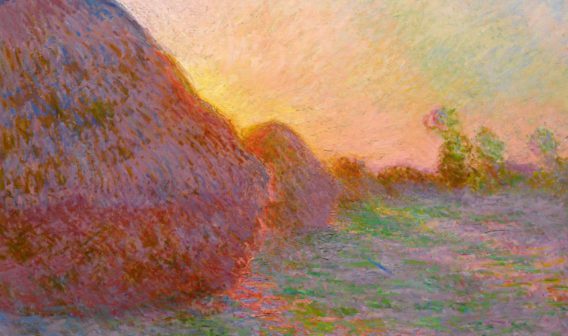 This piece from the iconic French painter’s “Haystacks” series set not only the artist’s personal record, but also the record for any Impressionist piece ever sold at auction. The piece nearly exactly doubled its flat estimate of $55 million. These numbers reflect a significant shift in the art market over the past 30-odd years: The last time this painting sold at auction was in 1986, for $2.5 million. Before that sale, the piece had lived in the private collection of famed Impressionist art collector Bertha Honoré Palmer, who bought it straight from Paul Durand-Ruel—the Impressionist master’s dealer—in the decade it was created.

Julian Dawes—Sotheby’s senior vice president, head of evening sales, and co-deputy head of department for Impressionist and modern art in New York—said of the work: “We seldom see works of such extraordinary caliber and immense symbolism come on the market, and because of that rarity, we saw fierce competition among collectors for this exceptional painting.”

Compared to the other works in Monet’s “Haystacks” series—all executed within a short window in the late 1880s and early ’90s—Meules separates itself through the vibrant burst of colors used to depict a sunset in the northern French village of Giverny.

Not only has this piece managed to offer its initial buyer in 1986 an annual return of 130% until 2019, but it would also be interesting to highlight the evolution of Monet’s painting (yellow line) always above the evolution of the S&P 500 stock index ( red line) and more consistent than the rest of the global works of Monet (blue line), observing a significant growth in its price from 2014 when the number of works available in the auction market is lower. Data extracted from Artprice, the leading information company on the art market listed on Euronext Paris.